rot13 (or other scripts) with Konversation

Recently, I needed a rot13 encoder / decoder for an IRC channel. It's a simple, stupid "encryption", a Caesar algorithm with 13 letters. It's often used to mask spoilers.

Now, Konversation is an awesome IRC client for KDE, but obviously not meant to be extended by such scripts currently. Still (with much help from #konversation! :) I found a working solution which is not *too* hackish.

Setting up a public NetHack Server

NetHack is an old role playing game which you play in a terminal (with ASCII characters). A typical NetHack screen could look like this: 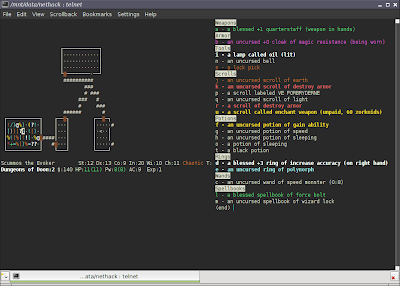 The game is very challenging, and really fun to play once you got used to its style. Most players play on public servers; the most widely known one is nethack.alt.org. There's several reasons for why you want to play on a server:
The most commonly used servers like nethack.alt.org (NAO), are pretty minimalistic with the patches they apply in order to match the needs of as many users as possible. That's just fine, but if you like playing around with things and optimizing this and improving that as much as I do, you might want to set up your own server. I'll give a short explanation on how to do this best.

Writing a browser game is easy... or not

When I started programming a few years ago, I was playing browser games a lot. After completing a few small projects I decided to write my own browsergame; it looked like a ridiculously easy program could be incredibly sucessful. Well, both turned out to be wrong: The programs aren't simple, and most of them also aren't sucessful.